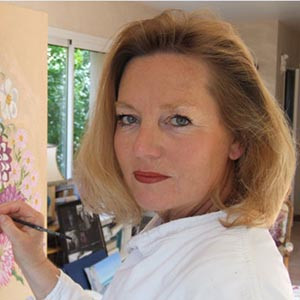 With a meditative temperament, Dominique Breton sees in nature the earthly face of God. It is impossible for her to create without direct and renewed contact with the spectacle that she puts before her eyes every day. She venerates it in all seasons, while developing her painting in two stages, first working outdoors and then completing the work in the studio, when the weather is less clement. "From time to time," she says, "a canvas flies away and is damaged, but I can't help but nourish my art with life. "Dominique Breton's studio opens onto her garden, so that she is, at all times, immersed in the plant world. It is all the more understandable as she uses a luminous and clear palette.

Settled at the very end of her village, Dominique Breton lives in a sort of oasis where flowers and plants bloom around her house. A pond full of fish gives this enchanting universe a very special note. As soon as spring is reborn, the birds mix their twigs with the nuances of the garden where the painter only has to bend down to feel the beneficial and fragrant presence of nature. As soon as he graduated from the School of Fine Arts in Rouen, Dominique was brought to work with the painter Franck Innocent, a leading figure in Normandy painting, who instilled in him a certain vision of things. Without denying the influence of her master, of whom she is now the executor, she nevertheless distinguishes herself by the softness of her palette and her lighter, more melted manner. It was in the mid-1970s that Dominique Breton undertook her very first personal exhibitions (in Rouen, Evelyne Née-Nocq and Patrick Grindel successively welcomed her to their gallery. Much later, Gérard Boudin in turn opened his picture rails to her. But she soon got into the habit of showing her work in different regions of France (Charleville-Mézières, Trébeurden, Quiberon, the Paul Gauguin Centre in Pont-Aven, etc.). In 1977, Dominique was lucky enough to be welcomed by the Présent Art gallery, immediately taking over from Léonor Fini. This fortunate combination of circumstances seriously put him in the stirrup.

If there are painters who are relentlessly repeating the same subject over and over again or who are resolutely attached to a particular site, Dominique Breton likes to walk his easel in all regions of France, admitting however a certain predilection for strikes in the Cotentin region. As his own mother lives in Carteret, this interest can be explained all the more. But it is Barfleur's surroundings that have recently inspired some of his best paintings. The atmosphere of the bocage and the small villages leading to radiant strikes (the lighthouse of Goury has earned him some very beautiful pages) has a charm tinged with a certain harshness and we understand that Dominique feels so well there. Each time she finds herself in this unparalleled setting, it gives her wings. No wonder she loves angels, whose vigilant protection intrudes into every room of her home. Golden, white or simply stained wood, these guardian figures truly fascinate her. This mystical pantheist detects in the beauty of nature the visible part of the living God, not the head of the armies, but the Love incarnated by the offering of Christ. Practicing drawing with unquestionable success, Dominique composes with ease, adapting herself just as well to a bouquet of dahlias as to a windy navy or a portrait. But it seems that the landscape corresponds completely to his temperament. To perfect her palette, she uses countless fabric samples that allow her to find all the nuances of nature when she has to rework the motif in the studio. When she paints, she only listens to sacred music, absorbing beauty with her mind and keeping her senses alert. At home, the purity of the shadows, the fleeting reflections of the waters, the humblest country lanes give rise to an original plastic translation. If landscape art certainly remains a relatively classical experience, each painter has the ability to bring his own nuance to the painting. In all regions, we manage to settle down and find quite extraordinary things," Dominique admits to us. The cliffs of the Pays de Caux, the Burgundy canal, the avenue of lime trees near Chateauneuf-en-Auxois, the cove of Réville, the magic of La Roche, a humble place in the Cotentin region, the pink granite coasts of northern Brittany are as many marvels for those who know how to see. I immerse myself in all these things to build my painting."

"There are always places and moments - rare, it is true, but very real - where the physical element and the metaphysical plane interfere, where the exterior adheres to the interior. " Julius Evola wrote in Méditations du Haut des Cimes, a title that should of course be understood in two senses (Editions Pardès, Guy Trédaniel). Isn't it true that for some artists, the landscape becomes a way of self-portraiture? 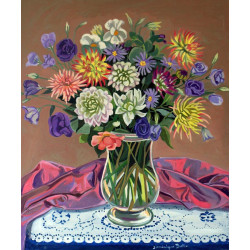 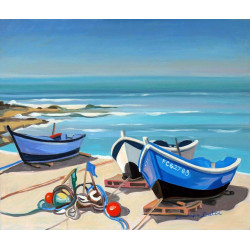 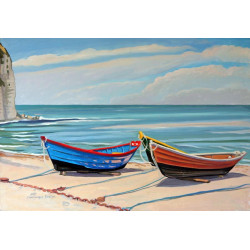 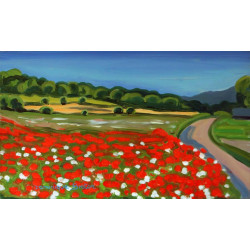 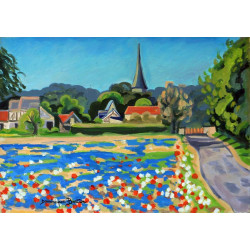 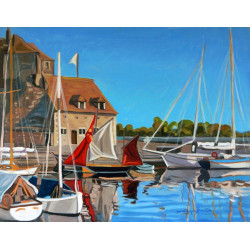 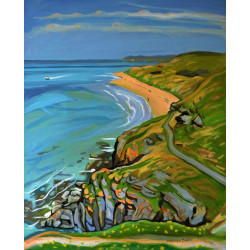 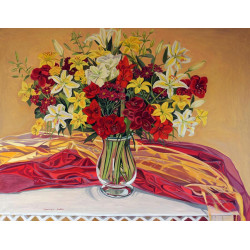 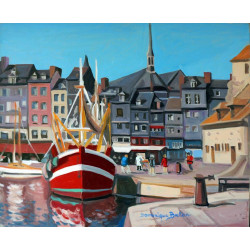 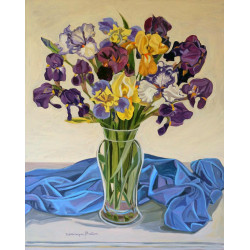 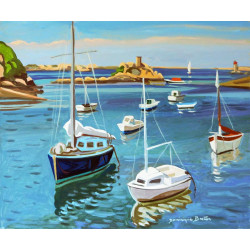 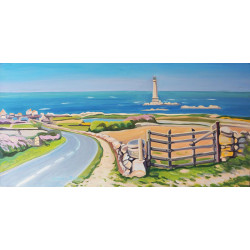